Hey everyone, as intimated in my last post, I have a new (final) blog home.

So come on over to the new improved Crossed Wires.

I'll be leaving this blog up for awhile while to let everyone know what's happened but I won't be updating here anymore. All the archives are at the new blog, so I haven't lost anything (well apart from my list of aussie authors which is now on the website links page!).

If you were nice enough to link to me here (or subscribe to my feed) please update to the new blog for continued blogging insanity and occasional common sense from me!
Posted by M.J. at 7:51 PM 0 comments

Okay everyone, it makes me kind of sad, but this blog is making part one of its move to Wordpress.

It's temporarily relocating to a WordPress.com version which is here.

I'll be posting new posts over there but will make one more post here as I'm going to be moving to WordPress.org once I change webhosts!

The temporary version is missing a few things at the moment like the blogrolls which will either reappear once I move again or will be transferred to my site!
Posted by M.J. at 8:43 AM 0 comments

A change is as good as a holiday (or necessary, even)

I'm currently in the process of getting a new website designed (early in the process but still). I'm pretty sure that the new site will be WordPress based and that pretty much means converting the blog to WordPress as well. After some poking around the internet the less than exciting news seemed to be that one can only import blogger content to WordPress if your blog template is new blogger based.

Phooey. So, I have finally had to give up my claw hold on my classic template and convert and this is the result. I'm sure there will be tweaking etc in it's future but it's about as close as I can get to the old blog for now. Hopefully the white posts backgrounds are easier on the eyes anyway. So welcome to the new (for now) look Crossed Wires! Short may it reign and let me know if there are any issues you find!
Posted by M.J. at 4:06 PM 5 comments

In true Chinese New Year do-over fashion I find myself starting my contest back up again in February rather than January but better late than never.

This month I thought I'd turn my attention to Urban Fantasy and one of my favourite series in recent years.

February's contest prize is Magic Bites by Ilona Andrews (who is actually husband and wife team Ilona and Gordon Andrews) who I share a publisher with (as unreal as that still seems). 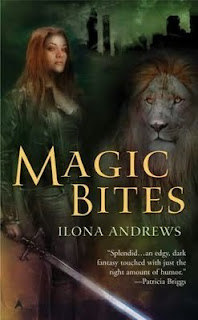 Magic Bites is the first book in the Kate Daniels series which currently stands at five books, each of which gets better than the one before (and the first one is pretty darn good to begin with). It's set in a magic riddle Atlanta where vampires and werewolves and all sorts of beasties wreak havoc. Kate is a genuine kickass heroine and, even better, one who grows and changes throughout the series. The bad guys are genuinely creepy and bad in this series and Ilona draws in all sorts of interesting mythology. There is a romantic subplot to keep us romance types happy (with a hot hot hero in Curran) and really, this is one of the best true urban fantasy series going around. So if you haven't yet jumped on the Urban Fantasy train and want to start with a good one or haven't jumped on the Kate Daniels train, here's your chance. Simply comment on any blog post this month for your chance to win a copy of Magic Bites.

Well, yesterday was not the most stellar writing day and today was worse.

Yesterday I wrote 700 words in a rush only to accidentally hit the off button on my netbook and lose it all. Then Cyclone Yasi's tail decided to drop about a month's rain on Melbourne in a day and I had more pressing issues to deal with like bailing out my backyard. I did eventually write another 1000 words or so but only by staying up too late.

After waking up every few hours to listen to what the rain was doing last night, I'm tired today and have been trying to get some heroine POV onto the page on and off all day. So far I've crawled up to 300 words or so but she's being unco-operative. So I'm going to give myself a pass for the day by saying an extra 700 yesterday counts. Or else I'll do 1700 tomorrow but either way I'm done for now!
Posted by M.J. at 8:23 PM 2 comments

Labels: lack of progress, the lost in the fog school of writing
Older Posts Home
Subscribe to: Posts (Atom)

This year, I'm trying out keeping track of my reading on Goodreads my read-2011 shelf: